The Illusion of Time

Time isn’t precious at all, because it is an illusion.
ECKHART TOLLE, The Power of Now 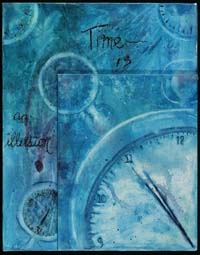 Does time really exist? Albert Einstein’s Theory of Relativity demonstrates that time is subjective to a person’s own relative position. Physicists over the past century have long struggled to comprehend what time really is. In their quest for deeper theories of the universe, some researchers increasingly suspect that time is not a fundamental feature of nature, but rather an object of our own perception.

On the physical plane called Earth, our concept of time passes in a linear fashion and is based on our perspective as we experience time. Dull or routine activities seem to make time drag, while stimulating activities seem to make time fly. The same perceptual instant is not the same time for all perceivers, so perhaps time is nothing but an accumulation of human thought. By getting rid of the illusion of time from our minds, we have the power to free our minds and to expand our consciousness.

So is it possible that if we go beyond our pre-conceived perceptions of this physical world, “time” would simply not exist? Since the beginning of the human concept of “time”, we have sought to live our life always thinking in terms of past, present and future, rather than being in the Now. The Universe and the energy we influence in the creation of our own individual realities, in reality have no concept of time, and as a result there is a no past or future irrespective of how much we force our own existence around this erroneous notion.

When we pass from the physical plane to a non-physical dimension whether it be through dreams, astral traveling or through death we are moving into an existence which is spaceless and infinite. After death when our soul leaves the physical plane, we enter initially the first level of the astral. The astral planes are spheres of vibrations in which all concepts of life have their origin. The non-physical dimension that we usually enter on our passing is the energetic lower astral realm, which is comprised of every thought, feeling and action taken and experienced by all humankind and perhaps non-human kind throughout evolution. This is an interesting realm in as far as it holds all of our hopes and dreams but it also harbours our deepest pain and fear. It is this level of the astral, which integrates with the physical plane, and it is where people on the physical plane experience paranormal activity.

Souls that exist in non-physical dimensions have no concept of time; twenty years can feel like a moment because time has lost its definition, so someone who died 100 years ago may think it is still 1909 because that is his or her individual paradigm; but in reality, they exist in a timeless void.

So perhaps it is possible to go beyond our pre-conceived perceptions of this physical world. Perhaps the passage of time is not absolute after all. In reality there is no cosmic clock ticking away the hours of the universe. Instead, what one observer experiences as time, may be just an illusion of the mind.