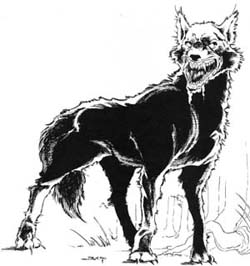 Black Dog legends are common all over the world. You find Black Dog myths in Siberia, North America and all over Asia. The origins of the black dog are difficult to establish.

The dog is the oldest domestic animal, traceable to the Paleolithic period, and they have enjoyed a peculiarly close relationship with humans ever since, sharing their hearths at night and guarding the home, working during the day as sheep dogs or hunters. Early literature has also implied the dog has a connection with the Otherworld. This is not unique to hounds as many species from bulls, boars, to owls and cuckoos have clear associations with the Otherworld. However, archaeological evidence and mythology brings recurring examples of a very specific role for dogs. They are the ‘psychopomps’, the guides on the paths to the Otherworld, the guardians at the boundaries of the worlds.

In ancient Egypt the dog or jackal-headed Anubis is both psychopomp and divine embalmer. His cult is older than that of Osiris, and can be traced to the Sumerian goddess Bau who was also dog-headed. Anubis himself, written in early heiroglyphs as ‘An-pu’, may be a direct continuation of Bau’s father, the Sumerian god An.

Dogs were closely linked with the Greek goddess Hecate. Indeed, at times she was depicted as dog-headed and was certainly linked to the Dog Star, Sirius. Her pet was the dog Cerberus (or Kerberos) who is the watchdog at the entrance to Hades. Usually depicted as triple-headed he was originally fifty-headed.

Dogs which fall under the supernatural banner are often referred to as hellhounds and are supposed to be demonic dogs of Hell, of course this is from a Christian perspective which views anything supernatural as demonic. Hellhounds typically have features such as an unnaturally large size, a black fur, glowing red eyes, super strength or speed, ghostly or phantom characteristics, and sometimes even the ability to talk. Hellhounds are often associated with fire, and may have fire-based abilities and appearances. They are often assigned to guard the entrance to the world of the dead or undertake other duties related to the afterlife or the supernatural, such as hunting down lost souls or guarding a supernatural treasure.

Hellhounds are also famous for appearing in Celtic mythology as part of the Wild Hunt. These hounds are given several different names in local folklore, but they display typical hellhound characteristics. The myth is common across Great Britain, and many names are given to the apparitions: Black Shuck of East Anglia (which has its roots in the Norse mythology rather than that of the Celts), Moddey Dhoo of the Isle of Man, Gwyllgi of Wales, and so on. The earliest mention of these myths are in both Walter Map’s De Nugis Curialium (1190) and the Welsh myth cycle of the Four Branches of the Mabinogi (ca. 10th-13th century).

The black dog is essentially a nocturnal spectre, and its appearance was usually regarded as a portent of death. It is often associated with electrical storms (such as Black Shuck’s appearance at Bungay, Suffolk), and with crossroads, places of execution and ancient pathways. Its Welsh form is confined to the sea-coast parishes, and on the Norfolk coast the creature is supposed to be amphibious, coming out of the sea by night and traveling about the lonely lanes. 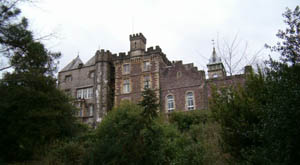 In April 2005 whilst I was staying at Craig-y-nos, which is one of the most haunted castles in Wales, I had an unusual encounter with the legendary Black Hound.

I had planned to stay at the castle for three days and was aware of its ghostly reputation. The castle was originally owned by a famous opera singer called Adelina Patti and after her death it became a hospital for children suffering from tuberculosis and also a repatriation hospital for soldiers during the first and second world wars.

The room that I was staying in was originally a dressing room, which was situated directly behind the stage that Adelina had built for her frequent operatic performances. As with all places in Britain there is central heating and this room had an oil filled heating system which had a tendency to make the room very hot and stuffy. I was quite exhausted on that first night at Craig-y-nos having travelled from Bath that day and I never even gave a single thought to the ghost situation when I turned off the light. I drifted immediately into a very deep sleep.

In the small hours of the night I was suddenly awakened and I realised the room had become freezing cold. My bed was next to the wall and as I placed my hand against the wall, it felt like ice. I immediately became aware of two dark male entities trying to burrow deep into my aura. My Higher Self immediately sprang into action and I was removed spiritually into the astral. The Watchers were then called upon to form a circle of protection around me and then rising from the depths of the underworld the Archangel Michael emerged dressed in a white robe, he had with him a large black hound by his side. The hound looked like a huge great Dane; and this hound under the direction of Michael proceeded to jump on my bed and then lay across me in a position of protection.

I remember nothing from that point on but after some time had elapsed and I again was awakened by a presence in the room. This time it was a ghostly woman in Victorian attire just standing in the centre of the room looking peacefully at me. I remembered sitting up and staring at this lady, the thought crossed my mind that this being was Adelina Patti and it was obvious she meant me no harm. I then put my head back on the pillow and then drifted back to sleep.

The next day I did a ritual and called in the Watchers to stand guard in the room while I was staying there and from that point on I had undisturbed sleep during the remainder of my visit.

It was not until I got home that I started my research on the black hound and discovered it’s significance within Europe. The black hound is also referred to as the ‘Witches friend’ or ‘familiar’. The black dog has held steady his sorcerous mystique over the centuries as the devil’s own embodiment. Cerberus’s repute as hell hound held fast to the black dog and he was given the status of a witch’s familiar, although his long term rival for human affection, the cat, now has taken the prize in these magical stakes.

I am grateful to Archangel Michael and the black hound on that incredible night; they saved me from a potentially grave situation. The black hound now has an honoured place as my animal totem and he is my constant companion whenever I undertake my underworld journeys.